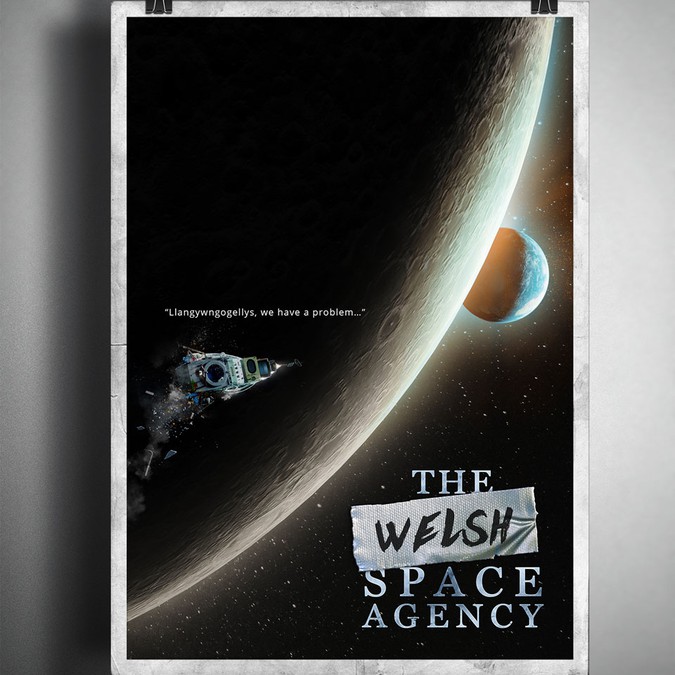 Winning design by AM Covers 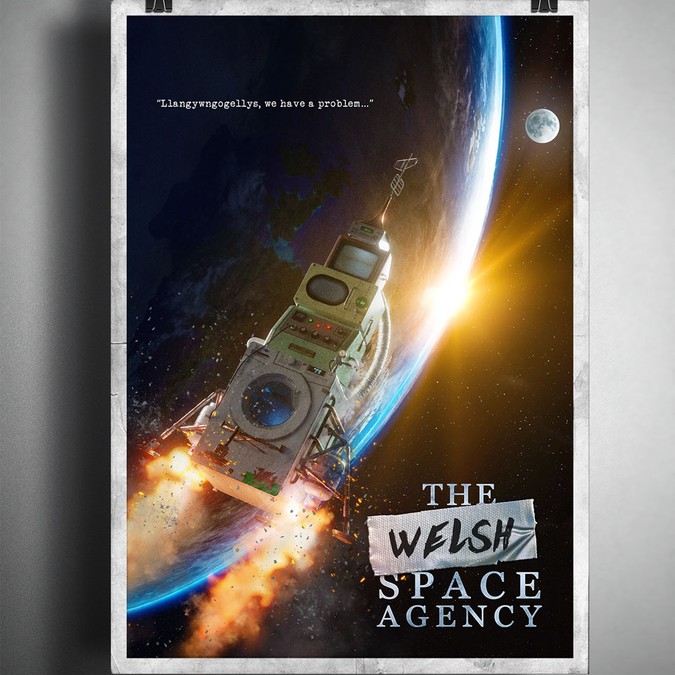 a-k-o needed a new poster design and created a contest on 99designs.

2 winners were selected from 110 designs submitted by 14 freelance designers. 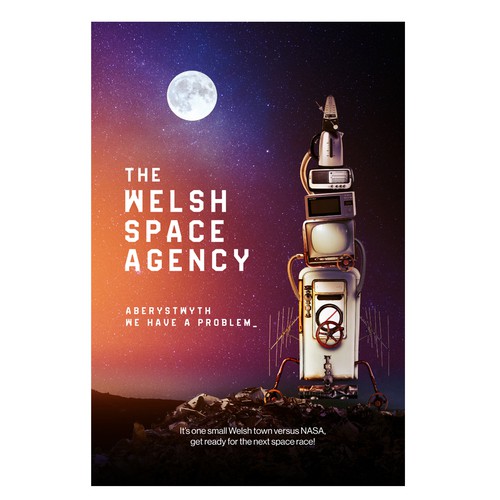 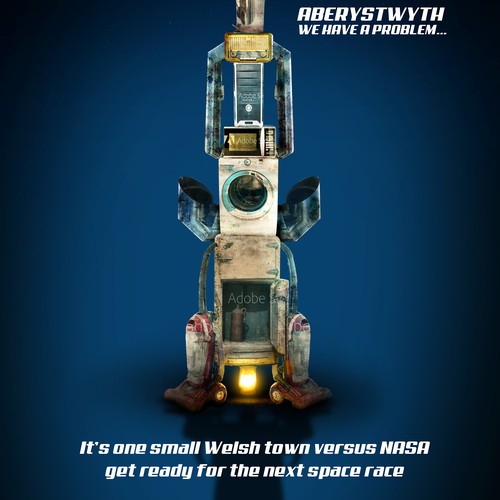 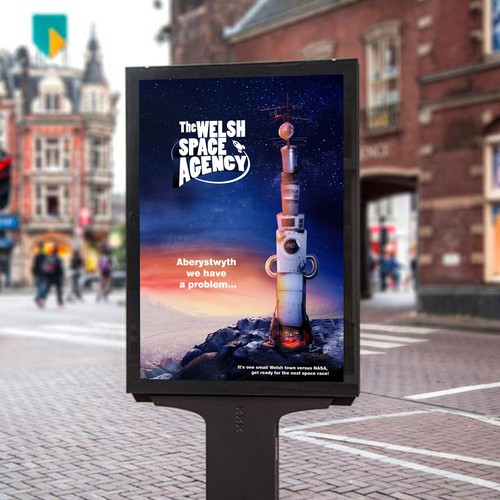 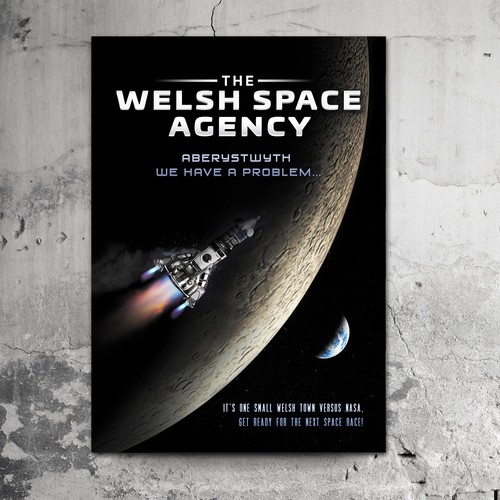 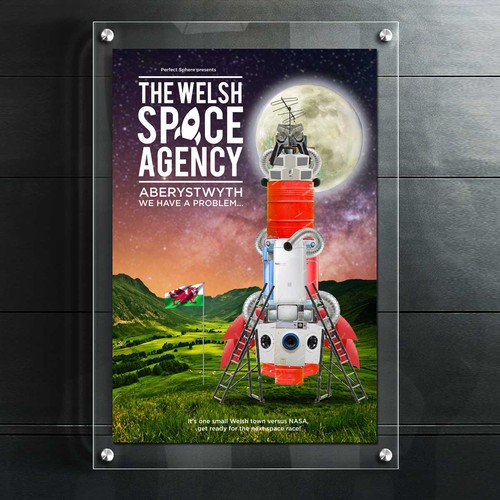 Winner - AM Covers
AM Covers did another fantastic job! I struggled to provide certain information (cover size, page count) at the start of the project, but AM Covers was very understanding and guided me through the process. The end product is fantastic!
- Anonymous

How a-k-o started their poster journey

The film is about a small Welsh town that tries to fool NASA into thinking it has launched a rocket into space.

To convey the comedic nature of the film we’d like the poster to feature a homemade rocket made of metallic junk and old household electrical goods, such as washing machines, refrigerators, microwave ovens, TVs, fans, venting duct, pipes etc… the rocket could also feature a Welsh flag.

We are considering two options for this poster – both featuring the rocket.

1. A poster where the rocket is the main feature on a simple background such as the Welsh hills, the surface of the moon, space, Earth’s atmosphere or just plain.

Tagline text: It’s one Welsh town versus NASA… get ready for the next space race.

2. A spoof poster, mimicking the poster for the film Apollo 13 poster (see images), featuring our rocket lost in the vastness of space, dwarfed by the moon and far from the earth.

Tagline text: Aberystwyth we have a problem…

The poster is for use on a pitch document. It needs to be a simple, clean image, that very quickly conveys the theme and nature of the film.

The Constitution THEATRICAL MOVIE POSTER
US$999
We are a film distribution company.
102
entries
13
designers
Dynamic 16 year old needs Eye-catching Event Flyer
US$199
Christopher Duffley is a talented speaker and artist. We visit schools, communities and different venues, sharing stori
54
entries
16
designers
Yeppoonfest 2018 Poster
AUD 259
Yepponfest is an annual music and cultural festival based in Yeppoon, Queensland, Australia. Target audience is adults b
30
entries
9
diseñadores
Documentary POSTER design for Age of the Entrepreneur!
CA$399
We create educational and inspiring documentary films.
89
entries
27
designers
University of Michigan Men’s Glee Club 159th Spring Concert
US$199
We are the oldest student organization on the Michigan campus, and the second oldest collegiate choir in the country. We
39
entries
9
designers
Create Podcast Art for me
$199
I am starting a podcast called The Musical Lawyer and I need some cool cover art to go with my podcast.
43
entries
17
designers

We saved a spot for your poster contest.

Get started now
Design an album cover for Monochrome Seasons' new album!
799 CA$
Monochrome Seasons is the solo project of multi-instrumentalist Antoine Michaud from Montreal, Canada. My music can be d
54
entries
14
designers
Fun, colorful and laid-back poster for outdoor film festival in historical Amsterdam
€269
Each summer, we organize a small, 5-day outdoor film festival in the center of Amsterdam. The location of the festival i
161
entries
21
designers
ZEIT
US$599
Music Label
94
entries
35
designers
1 out of 14 posters for a Classical Music Festival
$199
We are an organisers of the international classical music festival named after a legendary Azerbaijani composer Uzeyir H
29
entries
12
designers
DON'T BE A SUCKA: Powerful film poster w/matching social media banners
US$199
91
entries
12
diseñadores
Girly Cute Vibrant Podcast Cover Art for The Ballerina Notebook
199 $US
The Ballerina Notebook is a podcast for young ballerinas and their moms. I am creating a platform that addresses popular
77
entries
25
designer graphistes
Learn more about poster design
See how it works