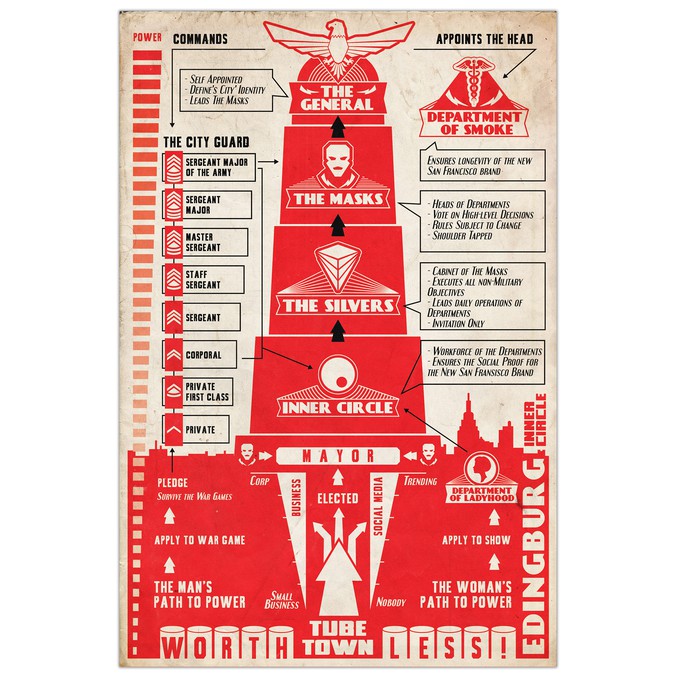 1 Propaganda Poster for our Glorious Organization!

bobcollopy1 needed a new illustration or graphics design and created a contest on 99designs.

A winner was selected from 13 designs submitted by 2 freelance designers. 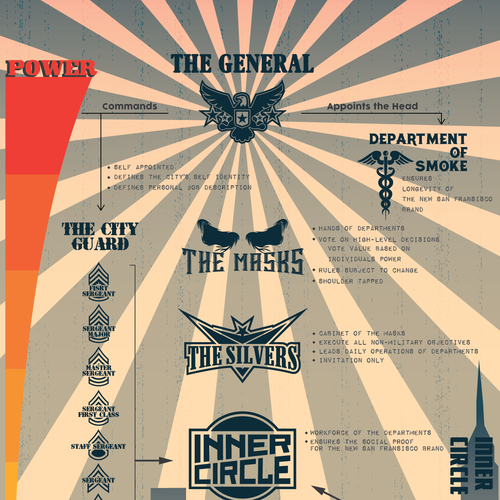 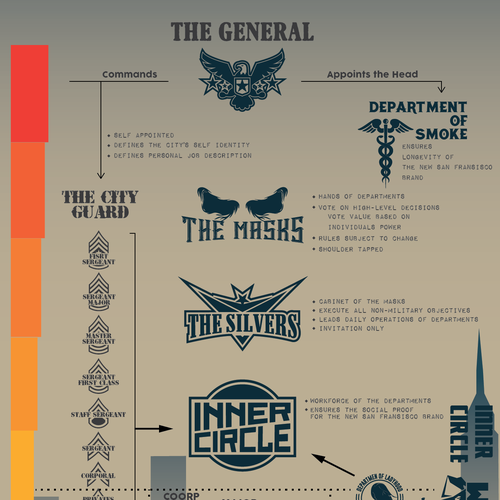 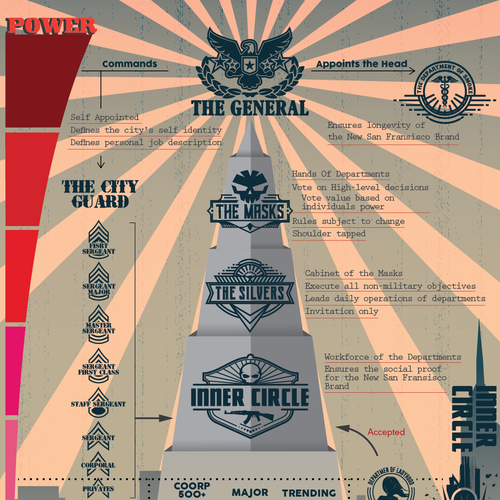 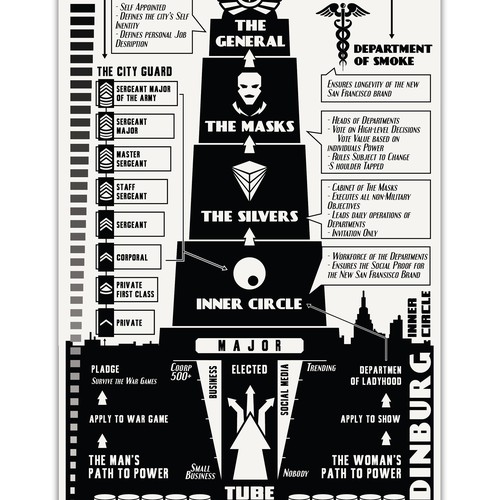 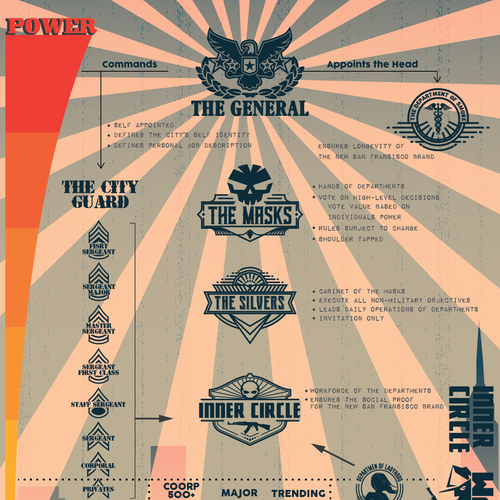 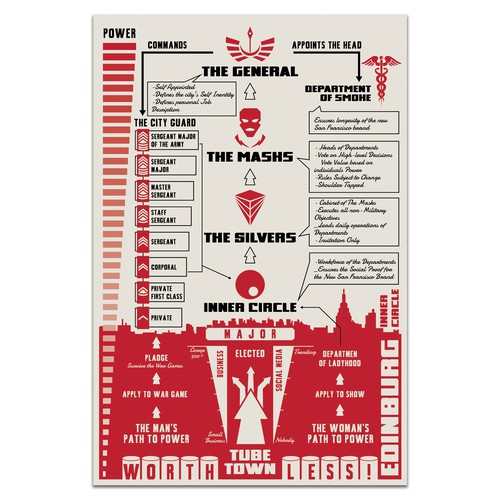 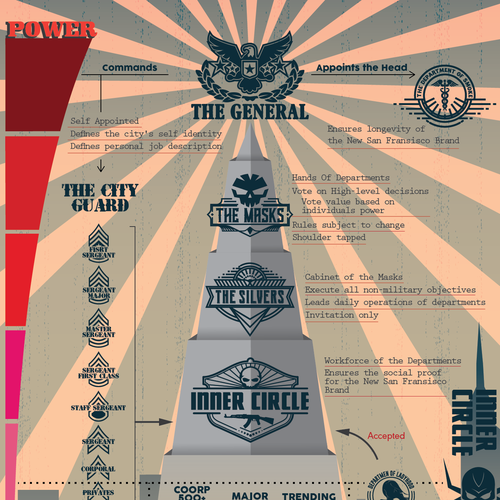 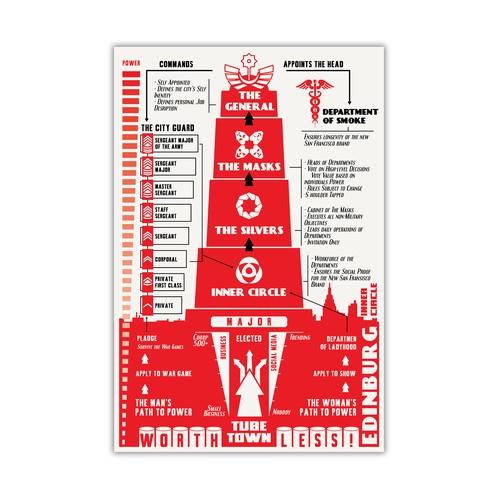 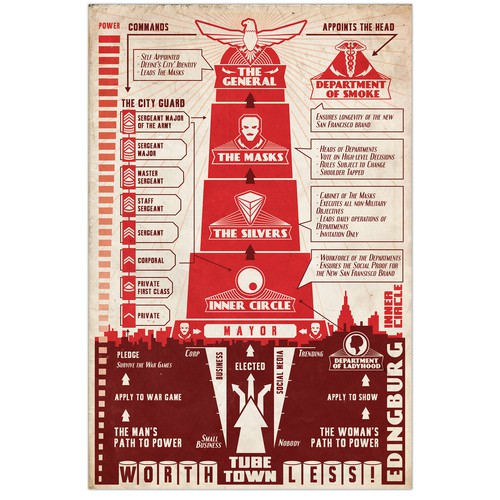 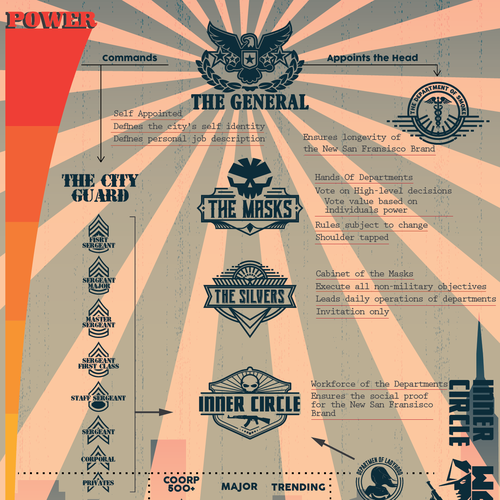 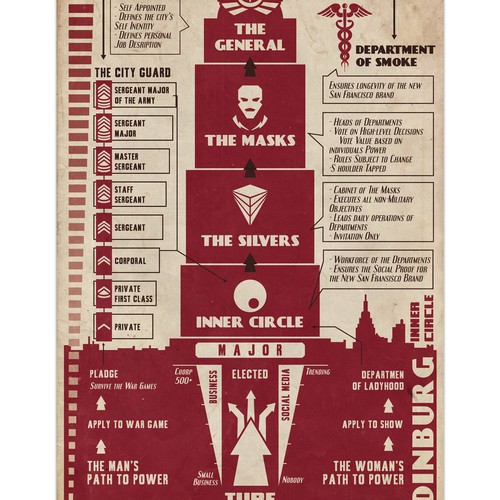 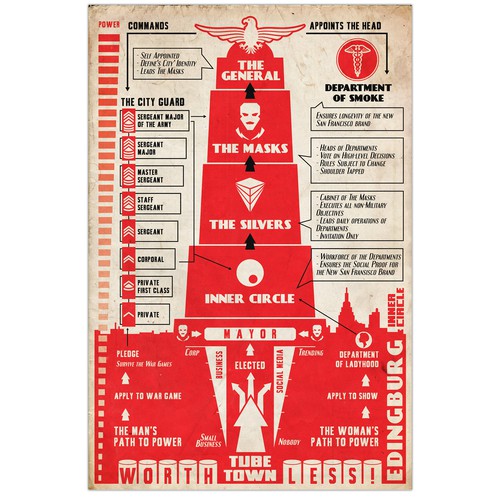 Winner - zarifa86
zarifa86 was extremely helpful in getting me to the final. I highly recommend.
- Anonymous

How bobcollopy1 started their illustration or graphics journey

The Department of Smoke

We are the directors of Propaganda for New San Fransisco. To better understand our Department, watch this book trailer for The Phoenix Cycle:

We target science fiction/fantasy readers. This poster is for a fictional book.

We need an old school propaganda poster made. The poster needs to fit in a 6" 9" book and a kindle book.

The physical book will be in black and white ink, which will affect how we communicate to our followers. (I don't need a book cover design)

The poster should look somewhat like an old school propaganda poster. Thing WW2 or even Bioshock (video game) posters. We have created the general layout of the poster and its overall design. The imagery of each group (aside from department of smoke) can be changed. The text explaining each group will be altered as we go, but is close to finished. Below is a break down of each section you will see of the attached image:

-Power: This image on the left side of the poster shows how much power each group has. It's like a graph.

-The General: A General (dictator) rules the American city. Feel free to change the emblem. You can use American Military imagery or something of the sort.

-The Silvers: The existing image is dumb. You are genius. We believe in you.

The City Guard: This one needs to be filled with American Army ranks. I suggest googling the ranks and assuring it all makes sense. I suggest the "enlisted" ranks as that makes more sense to the book.

Edingburg Section: So this part requires some understanding. "Edingburg" is a ghetto in the city. It is ruled by the "Inner Circle." If you're from Edingburg the only way to get into the inner circle is to pass some tests. So it's important to have an interesting illustration that shows that in a visual way. Get creative with this, it's important to show the duality.

Business: There's too much of a break down on size of businesses. Basically, it needs to be simplified from small to big company. I'd change the look of that section.

Social Media Presence: same goes for that. I'd start with the rank of "nobody" to "trending"

The Elected/mayor section in the middle is the most important. We will also need an area of text to explain it and to draw an arrow showing that the mayor of edingburg can sit with the "masks."

The Man's Path to Power: This can be made to look better

The Woman's Path to Power: Ditto

The Department of Smoke: Just make it look like the image and leave a text area to explain it.

-It has to look like a propaganda poster in a book, so you may have to get creative on that. Perhaps a wall behind it or something, but space is limited in order to assure the reader can easily see everything.

Note that the proportions on the map grid are not perfect. You'll have to adjust a lot of this.

Singer-Songwriter Needs a Clean Vintage Album Cover
US$ 349
I am a solo singer/songwriter guitarist. I play shows in the Midwest at clubs, bars, and coffeeshops. Target audience is
46
entries
16
designers
Twisted Disney Concept EP
349 USD
Collaboration for school. We are paired with another student and expected to put together a concept EP for our final ...
30
entries
17
designer
DESIGN "WIZDOM" OFFICIAL ALBUM ARTWORK
US$ 899
Hip-Hop Music targeted to all ages
89
entries
32
designers
Fun 8bit cover & social media banners for our #POOLIGANS podcast!
409 $US
Currently hosting a podcast bringing together fans of the SiriusXM show "The POTUS Press Pool" .
10
entries
6
designer graphistes
Illustration - Lifestyle of 5 women enjoying their lives
899 US$
Fyone is a singer, performer, and influencer. She is trying to promote her unique lifestyle to her fans and followers th
92
entries
22
diseñadores
'West Side X West Side' Mixtape Album Art- West Side Story vs West Coast Rap
US$ 349
Hybrid music that bridges the gap between classical and popular
38
entries
16
designers

We saved a spot for your illustration or graphics contest.

Get started now
Design an eye-catching album cover for The Restless's new album "The Revolution is Love"!
US$ 349
The Restless are a band from Virginia in the United States. Our musical style is a mix of pop, rock, and dance. We pro
162
entries
38
designers
Vocal Sample Pack
319 €
We help DJs find their voice. We are a vocalist/songwriter agency providing vocal/song material to DJs in any genre.
97
entries
14
Designer
Design For Debute Single by Roy Edri "THIS HEART" single Release
$349
artist is a Hip Hop / Pop R&B With a Rugged unifying message targeting 16 to 45
116
entries
37
designers
ALBUM COVER - Ambient/Meditation Music
US$364
this is a hybrid meditation/ambient album where each composition paints a vibrational movie with music - please listen t
78
entries
30
diseñadores
Guide Cover for the 2019 Hollywood Fringe Festival
US$ 899
We are the largest performing arts (theatre/dance/cabaret/etc) festival in the Western US. To date, we have presented ov
56
entries
19
designers
99social: 1920's/Art Deco Style Poster for our Annual Mid-Year Event!
469 AU$
We are the 99designs SocialClub team from Melbourne and we need your amazing skills to help us create a poster for our a
116
entries
43
Designer
Learn more about illustration or graphics design
See how it works