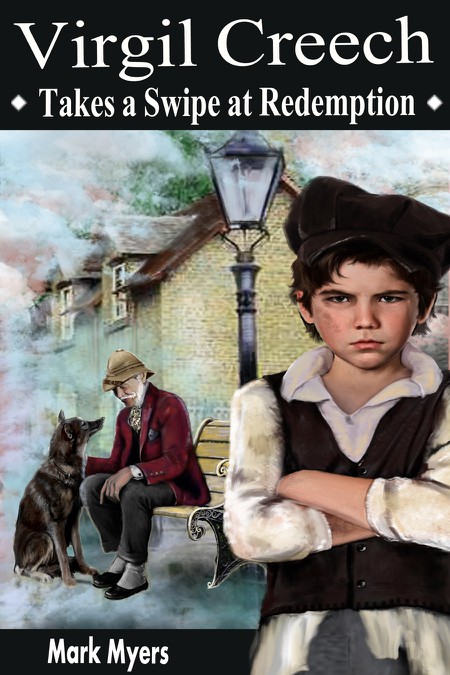 Mark.myers needed a new book or magazine cover design and created a contest on 99designs.

A winner was selected from 36 designs submitted by 8 freelance designers. 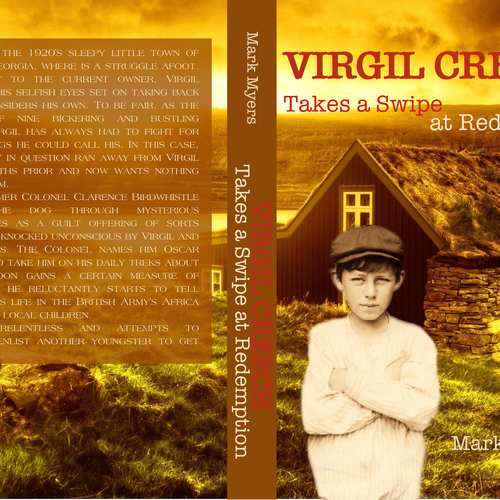 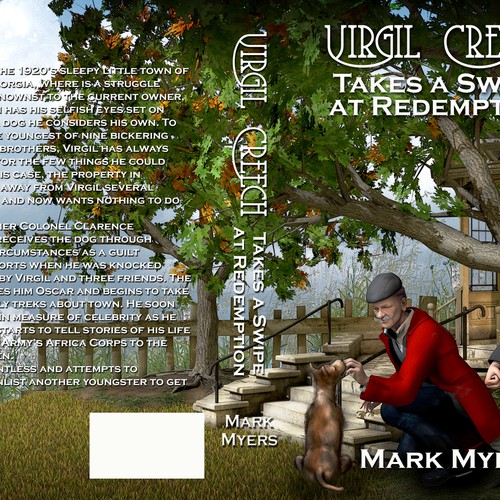 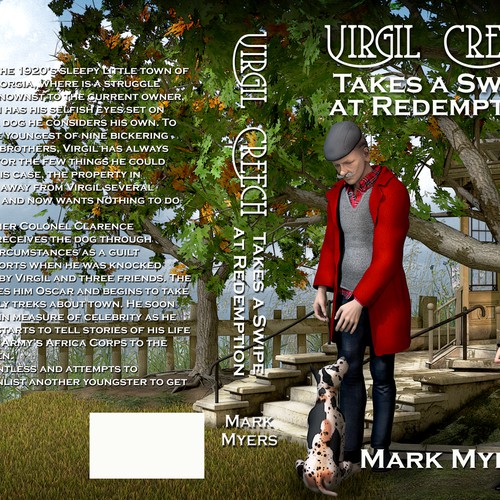 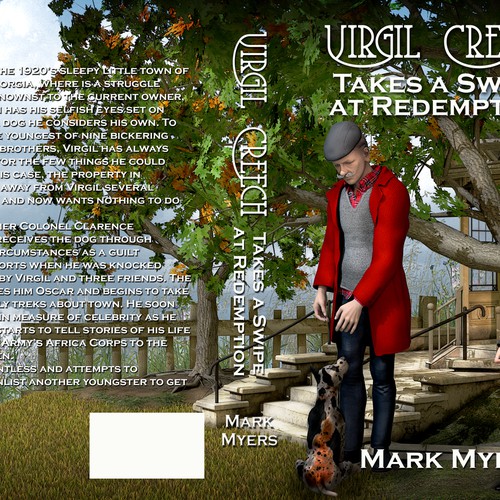 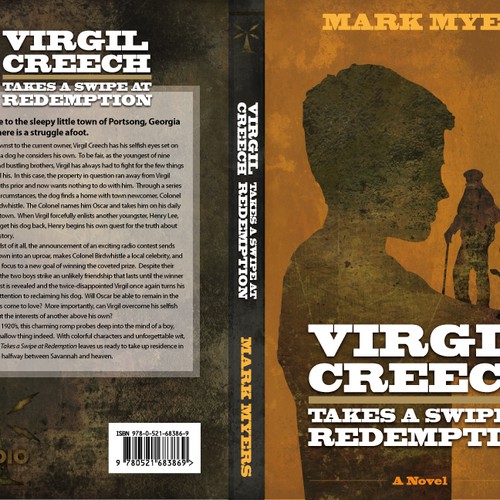 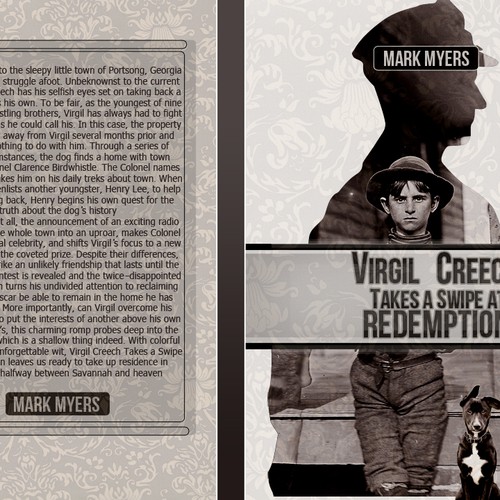 Finalist - DHMDesigns
Great work. It will help my career. I look forward to using the cover soon.
- JamesKPratt

Below is a summary of the story. I'd like to use the book cover as both a print and ebook cover. The book is middle grade fiction, but ideally, I'd like the cover not too look too much like a children's book.

The main characters that could be incorporated in the cover are Virgil, Colonel Clarence Birdwhistle, and the dog, Oscar. Character descriptions are attached.

Virgil is 10-12 years old, He's rough, dirty and constantly has a black eye from the scraps he gets in. I've not described his appearance in detail in the story, so that is up to the artist.

Welcome to the 1920’s sleepy little town of Portsong, Georgia, where is a struggle afoot. Unbeknownst to the current owner, Virgil Creech has his selfish eyes set on taking back a dog he considers his own. To be fair, as the youngest of nine bickering and bustling brothers, Virgil has always had to fight for the few things he could call his. In this case, the property in question ran away from Virgil several months prior and now wants nothing to do with him.
Town newcomer Colonel Clarence Birdwhistle receives the dog through mysterious circumstances as a guilt offering of sorts when he was knocked unconscious by Virgil and three friends. The Colonel names him Oscar and begins to take him on his daily treks about town. He soon gains a certain measure of celebrity as he reluctantly starts to tell stories of his life in the British Army’s Africa Corps to the local children.
Virgil is relentless and attempts to forcefully enlist another youngster to get the dog back

Colonel Clarence J. Birdwhistle - Elderly gentleman, retired from the British Army. “Regarding his appearance, he had noticed over the years that his ears had grown quite large and the bulb of his nose had rounded. It was a disturbing trend, and he feared what they would be after another decade. Years of work in the sun had chiseled deep lines through his darkened face, giving his skin a strange, leathery aspect. However, the oddest thing about this man was not his face as a whole but what was on it. He wore huge bushy sideburns and a long, white mustache. Every morning he spent time rolling each end of his mustache into a tight spring that he fancied as the fashion of the times. It was not the fashion of the current times, and had not even been fashionable in his own lifetime. But he liked the way it looked on him very much and had convinced himself that others looked upon him with a favorable air because of it.”
He is always polite, loves to wear hats and can usually be found in his trademark red coat. In the story he takes to wearing a pith helmet for safety. The Colonel left his home as a young man in search of adventure and spent his entire service in southern Africa until his retirement from duty. He moved to Portsmouth as a sort of secondary adventure. During the story, he becomes woven into the fabric of the city and comes to view its citizenry as a new family replacing the one he left behind.

Virgil Creech - As the youngest son of the most notorious family in Portsmouth, Virgil is a boy who craves attention and will stop at nothing to get what he wants. He has had to learn to fight eight brothers to get his way and doesn’t even mind losing if he can get a black eye out of the scrum (thereby garnering more attention.) Virgil is selfish and lonely, but there is a glimmer of hope in the boy that emerges as his friendship with Henry grows.

Here's the description of the dog: “He wasn’t much to look at. His coat was a dabbled mix of grays and browns that flowed together unevenly, as if a failed artist had poured paints over him and walked away before getting the portrait right. In fact, it was impossible to tell if the color on him was really him at all or filth and grime that had stuck itself onto him over the years. His coat didn’t waste its time with a single patch of clean. It was wiry and matted and evidently itched him in places just out of reach of his back paw at the moment. His ears stood straight up when he wasn’t scratching something. Behind him, half a crooked tail wagged slowly in the air. The fur on it was stuck close so it almost looked like rope with only a few wispy strands poking out. He had a look of intelligence to him and he seemed to trust these three strangers, although he had yet to allow them the privilege of getting too close.”

YA Superhero Book Cover
299 $
My book is a YA superhero novel about what happen when it's the popular good looking teenager who gets super powers a...
13
entries
4
Designer
Nautical Themed Sci-FI Book Cover
799 $US
This is the first book in a science fiction series....
98
entries
15
designer graphistes
Lake of the Falls Book Cover
$299
Driftless House Publishing in an independent publisher of fiction books....
86
entries
39
designers
Fantasy eBook cover for "Legion on the March"
$299
Production and publishing of high-quality audio, video, and written content for non-fiction and fiction audiences....
148
entries
27
designers
In My Head - A new novel by Sabrina Winters
$299
Author of fiction novels. My target audience would be teens and young adults....
24
entries
8
designers
Project Apex
299 US$
A Man's Guide for reaching his ultimate potential.
18
entries
9
diseñadores

We saved a spot for your book cover contest.

Get started now
SciFi Series E-book Cover Illustration (already need multiple covers)
$299
Looking for a replacement book cover illustration (most likely not a design) to be used primarily for e-book sales....
35
entries
9
designers
Create a feel good book cover for a summer crime comedy at a lake
500 €
I am a German writer. This will be my first self-published book. I'd like the readers to feel good and happy.
97
entries
28
designer graphistes
1930s action adventure story book cover
£189
Independent publishing house specialising in genre fiction and non-fiction....
57
entries
16
designers
Dynamic novel cover design with a focus on action & adventure in a Premium style.
£789
First time author of young adult action/adventure fiction. Teenagers are the target audience....
37
entries
8
designers
WANTED: Kick-Ass Book Cover for a Futuristic Crime Novel
299 $US
My name is Tarah Benner. I'm an independent science-fiction author who's pivoting to the futuristic crime genre.
56
entries
7
designer graphistes
Memoir: "Yes, and..." In life you must accept, agree, and respond. A True Story.
$299
I've written a memoir. It's an inside look during a time of losing my wife, with a responsibility of moving forward f...
188
entries
32
designers
Learn more about book or magazine cover design
See how it works